As far as OUTA is concerned, the 60% discount on past e-toll debt is farce and doesn't change a thing.

We always said that applying extortionist and punitive tariffs was never going to be an effective tactic for SANRAL to apply in the first place. The majority of the motoring public have rejected the scheme, not because of the tariffs, but because the scheme is unjust and irrational. If the Gauteng motorists were sold on the scheme in the first place, they would have gone out and fitted e-tags to enjoy the discounted rate from the start.

Furthermore, the reduced monthly cap doesn't change the exorbitant costs of collection, which comes in at over R1 billion per annum and enriches foreign companies.

We believe a few people may succumb to SANRAL's new carrot, but it will not push their current low 25% compliance levels to much more than 40%, which was where the was in mid-2014 and at those levels, the scheme remains a massive failure as a user pays mechanism.

The Opposition to Urban Tolling Alliance (OUTA) has always maintained that the inefficient e-toll scheme was introduced unlawfully and that the public have every right not to pay tolls for the use of Gauteng's freeways. "A 60% discount of zero rands due, remains zero, as far as we are concerned." says Wayne Duvenage, Chairperson of OUTA.

Furthermore, OUTA have now launched their new 'E-toll Defensive Umbrella' campaign, aimed at providing legal support for all of its contributing supporters, in the event they are summonsed for non-payment of e-toll fees. Those public supporters who agree to OUTA's conditions and sign-up to donate a monthly contribution of an affordable value of their choice, will fall under OUTA's defense umbrella. 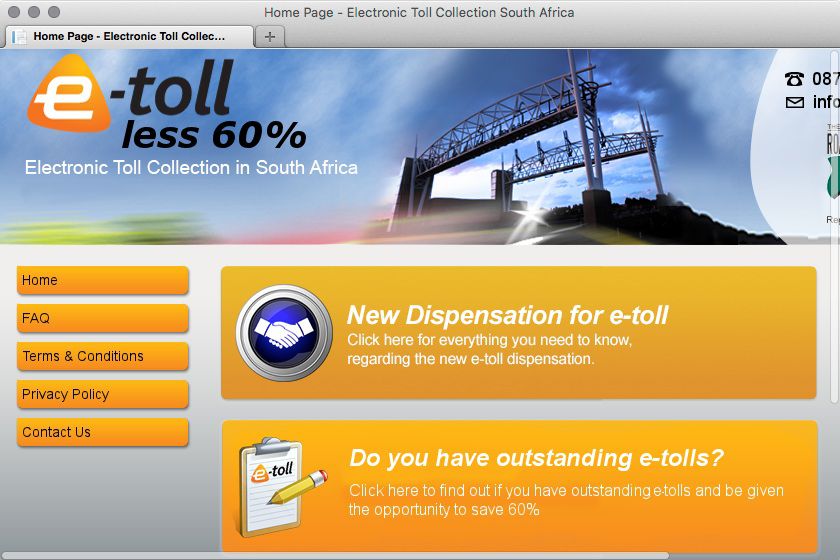 In response to news that SANRAL has transgressed the Metrology Act in failing to obtain certification of its electronic systems, OUTA has issued the following statement.