The time for criminal prosecution and even imprisonment is long overdue

The decline of municipalities across the country will not stop until municipal officials and political office bearers are held accountable, says the Organisation Undoing Tax Abuse (OUTA).

OUTA commented on the Auditor-General’s latest municipal audit outcomes report for the financial year of 2019/20. According to the AG’s report, the financial position of just over a quarter of the 257 municipalities in the country is so dire, that there is significant doubt that they will be able to continue meeting their obligations in the near future.

Julius Kleynhans, Public Governance Executive at OUTA, says it is crucial for municipal leadership responsible for the dire state of local government across the country, to be held accountable. “If nobody is held accountable, the status quo will remain.”

According to Kleynhans, successive audit reports point to a lack of consequence management, poor leadership and a lack of accountability. “It has become the norm that officials and political office bearers are, at best, suspended or removed from office and in many cases deployed to other government positions. Until individuals or leadership collectives are held accountable by way of legal prosecution and even imprisonment, nothing will change, and matters will just get worse.”

According to the Auditor-General, only 72 municipalities (28%) have been able to submit “quality financial statements for audit purposes” while the remaining 185 municipalities “have still not mastered the basics of financial reporting”.

An analysis of current and previous Auditor-General reports from 2016/17 to 2019/20 - which covers the entire elected term of local government beginning in August 2016 - reveals there is a general decline in overall municipal audit opinions.

OUTA urges the Auditor-General to refer obvious cases of criminality to the National Prosecuting Authority (NPA) and the South African Police Service (SAPS), as is required by the recent amendment of the Public Audit Act, which came into effect in April 2019. The amendments provide the Auditor-General with powers to refer suspected “material irregularities arising from an audit to a relevant public body for investigation”. Furthermore, the amended Act further allows for the Auditor-General to issue a “certificate of debt where an accounting officer or accounting authority failed to recover losses from a responsible person and to instruct the relevant executive authority to collect the debt”.

“For as long as there is no accountability for poor financial controls and maladministration, criminality and corruption will flourish. The Auditor-General needs to urgently refer clear cases of fraud and corruption to the appropriate authority to help rebuild the trust deficit that exists between residents and municipal leadership,” said Kleynhans.

Kleynhans urged the Auditor-General to create the extra capacity needed within her office to expedite the enforcement processes against errant administration and councils. 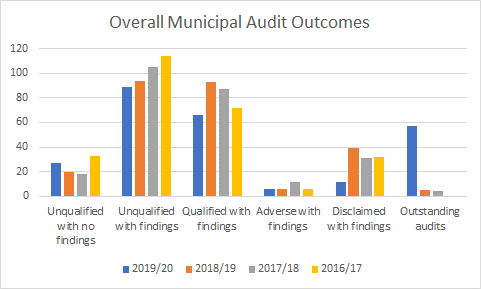 By the time transport authorities are ready for the demerit system to have a start date gazetted, OUTA’s legal challenge against the law will be in court