Minister's Energy Indaba is not consultation

Bulldozing ahead with today’s Energy Indaba shows the government is desperate to get nuclear power underway and is not prepared to tolerate any opposition to this.

Minister's Energy Indaba is not consultation

The Organisation Undoing Tax Abuse (OUTA) strongly opposes the way this Indaba has been arranged and opposes any attempt to portray this as public consultation.

“This is not consultation,” says OUTA Chief Operating Officer Ben Theron. “We absolutely reject the Indaba as any form of public consultation as the Ministry chose who should attend. OUTA will fight this manipulated and flawed process.”

OUTA protested outside the Indaba in Midrand.

The Department of Energy tried to keep the indaba as quiet as possible and, when that didn’t work, tried to block opposing voices – including OUTA – from attending.

The programme seems to indicate that the Indaba is regarded as consultation despite a detailed complaint to Minister of Energy David Mahlobo.

Last week OUTA asked the Minister for urgent clarity on this Indaba - view the letter here.

“We applied to attend the indaba but again, there was no response.”

The energy policy process and, particularly, the attempts to include nuclear build, is hugely controversial and the Department of Energy clearly knows this. Discussions and decisions on these matters must involve clear, legal and effective public participation which doesn’t include hastily arranged meetings with a limited guest list.

This Indaba is being opposed by civil society organisations and others including the South African Academy of Engineering.

The judgment in April in the high court case brought by Earthlife Africa and the Southern African Faith Communities’ Environment Institute against the Minister of Energy and others sent the nuclear power procurement process back to the start. This process includes a determination made in terms of the Electricity Regulation Act on the requirement and procurement of new nuclear generation capacity, which involves the Minister and the National Energy Regulator (NERSA) and which requires NERSA to hold a public participation process. The Minister must have a plan on which to base this determination, but the Integrated Resource Plan and the National Integrated Energy Plan both need updating.

“Rushing this process means the voices of South Africans are not heard. The Minister doesn’t want to hear the real facts about nuclear but seems determined to abuse his power to drive it through,” says Theron.

“This Indaba doesn’t bring us any closer to real public participation and an honest public discussion on this crucial matter.”

OUTA will do everything in its power to oppose the irrational nuclear deal. 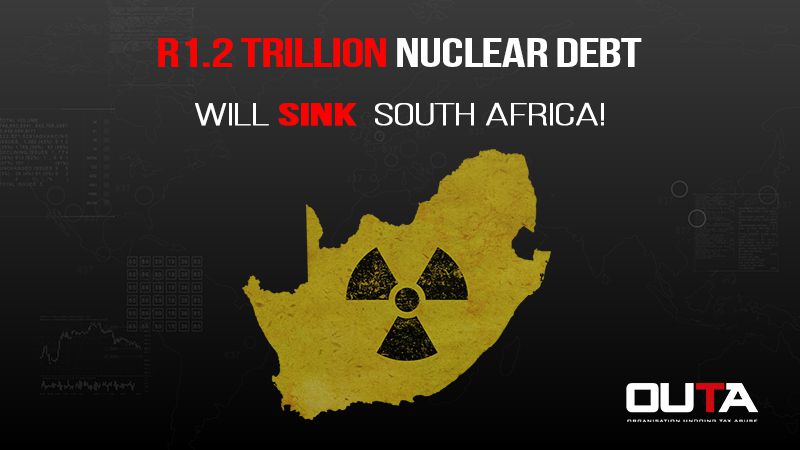 Ramaphosa has opportunity to save SA with NPA appointment