OUTA calls for no increases to fuel levies in 2022

OUTA calls for no increases to fuel levies in 2022

OUTA has written to Minister of Finance Enoch Godongwana, calling for a halt to the annual increase in the fuel levies.

The levy increases are announced in February every year in the Budget.

“While we understand that we are a cash-strapped nation, we can no longer afford to burden society with higher taxes and levies applied to the price of fuel,” says Wayne Duvenage, OUTA’s CEO. “We have witnessed substantial increases to the price of petrol and diesel, as a result of ongoing above-inflation increases to the basket of 12 other levies and charges, which have collectively increased by over 125% over the past decade. At an average of 8.5% per annum, these increases have been well above inflation and the result is a compounding effect that makes the collective cost of levies and surcharges more than R10.00 per litre of petrol, before one drop of the basic fuel price is added.”

While the weak rand (at an average of R15.85 to the US dollar in November) and the high international cost of Brent crude oil (at $83.50 per barrel) are the main factors that currently contribute to the highest ever prices for petrol in South Africa (now at R20.34 per litre for 95 octane inland), we must remember that we have experienced much higher prices for oil in the past.

A decade ago in 2011/12, the average price for Brent crude was $114 per barrel, some 36% higher than it is today. Fortunately at that time, our currency was a lot stronger at R7.41 to the US dollar, compared to last month’s average of R15.85. It is therefore a combination of our weak currency and the ongoing increases to levies (which are now collectively R5.59 per litre higher than they were a decade ago) which gives us our highest price of petrol today.

Today, the combination of the fuel levy (FL) and road accident fund (RAF) levy feed roughly R135 billion per annum into the National Treasury’s coffers. This figure was around R55bn a decade ago. OUTA believes that government is extracting enough from society from these two levies and should seriously consider not increasing these levies in 2022, to cushion the impact of higher-than-inflation increases from the past.

“Instead of reaching out to extract higher taxes from the citizens every year, government should look for savings and improved productivity and other efficiencies within the state’s spending and processes,” says Duvenage. “To add another hike in fuel taxes in 2022 would be a slap in the face of overstretched citizens and would add more burden to everyone in the country”.

A soundclip with comment from Wayne Duvenage is here. 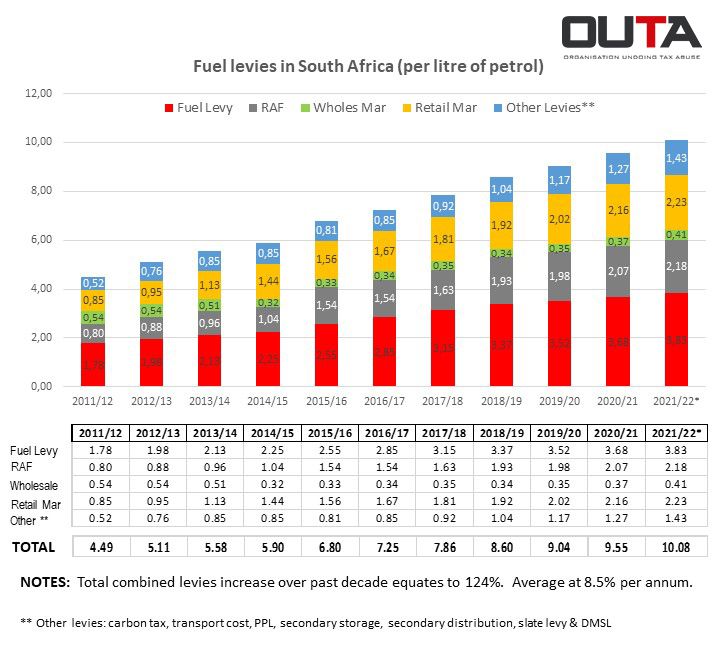 OUTA: Decision to scrap e-tolls not final until enacted

We're still waiting for the tolling decision to be reversed