OUTA this week laid criminal charges against suspended Eskom executive Matshela Koko regarding a series of irregularities, corruption and fraud.

“We have built a solid case against Koko with evidence of misconduct in his role as an Eskom executive and his relationship with the Guptas,” says Ben Theron, OUTA Chief Operating Officer.

In December 2016, Koko was appointed as Interim CEO of Eskom and was suspended in May 2017. Koko has been an Eskom executive since 2014 and, since October 2015, the executive in charge of generation which includes oversight of coal contracts.

Koko is accused of using his position at Eskom to help the Guptas to buy Optimum Coal Holdings and its Optimum and Koornfontein coal mines from Glencore, by helping put those businesses under financial pressure to force the sale to the Guptas and helping fund the Guptas’ purchase.

Optimum had a coal supply agreement with Eskom and had been involved in a dispute with Eskom for some years over the quality of the coal supplied and the contract which forced Glencore to sell its coal to Eskom at a huge loss. Eskom fined Optimum R2.177 billion in penalties and, in July 2015, made legal demand for full payment. By this time, the Guptas had already made an anonymous offer to buy Optimum but were rejected. The demand for the penalties payment was apparently the last straw financially for Optimum, which went into business rescue on 4 August 2015.

On 10 December 2015, Glencore, OCH and the business rescue practitioners signed an agreement to sell the OCH mines and assets to the Gupta businesses Oakbay Investments and Tegeta Exploration & Resources for R2.15 billion; this deal had to be paid for and finalised by 30 March 2016.

In December 2015, Tegeta emailed Koko referring to the need for a prepayment confirmation, asking him "to kindly send us a written confirmation regarding the payment for supply of coal amounting to R1,680,000,000 ... detailing the agreed terms and conditions".

During December, Koko engineered a coal “emergency” by manipulating the coal supply situation, removing Just Coal as one of its suppliers. Using emergency procurement procedures, Eskom signed new coal supply agreements with Tegeta and, between 29 January and 26 April 2016, paid Tegeta R1.2 billion on these contracts including prepayments; a large part of this was used to fund Tegeta’s purchase of Optimum. This was particularly useful to Tegeta when it failed to meet the initial March 2016 payment deadline and needed funds for the shortfall in April. Eskom also provided a R1.6 billion guarantee to Tegeta to help its funding situation.

In January 2016, Koko took a trip to Dubai where he stayed in the Oberoi Hotel, all at the Guptas’ expense, underlining his close links to the family.

Throughout the Optimum financial collapse and subsequent sale, Eskom had insisted that the R2.177 billion penalty would not be waived for Glencore or any new owner. But in July 2017 at a media briefing Eskom publicly confirmed that the fine had been reduced to R577 million, saying the coal quality readings on which it had based the penalties were wrong. At the same briefing Eskom also confirmed the R1.6 billion guarantee to Tegeta, which it had previously denied.

In May 2017, Koko was placed on special leave pending an investigation when it was revealed that a company at which his stepdaughter was a director at netted at least R1 billion in contracts from Eskom in just 11 months.

Over recent weeks, the Organisation Undoing Tax Abuse (OUTA) has laid similar charges against others over state capture allegations, including Eskom former and serving executives. 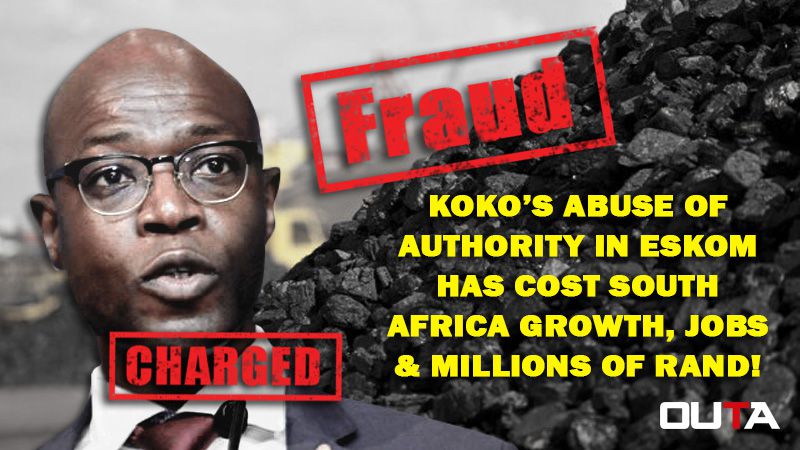 OUTA calls on President Jacob Zuma to appoint the new SABC board recommended to him by Parliament without further delay.