Now that e-tolling has started, the Opposition to Urban Tolling Alliance (OUTA) have conducted a number of physical e-tag counts on vehicles in two environments, freeway and non-freeway use.

The results give a clear indication that SANRAL has once again fabricated their e-tag sales to more than double what they are.

“Based on a statistically sound sample size, OUTA’s research shows that only 15% of freeway users are tagged and 9% of vehicles counted off the freeway were tagged.  Obviously, it is the freeway-user count that matters in this exercise, but the off-freeway count helps to corroborate our findings,” says Wayne Duvenage, the chairperson of OUTA. One would expect non-freeway tag rate to be lower as there will be around 33% of vehicles in Gauteng that do not touch the freeways. 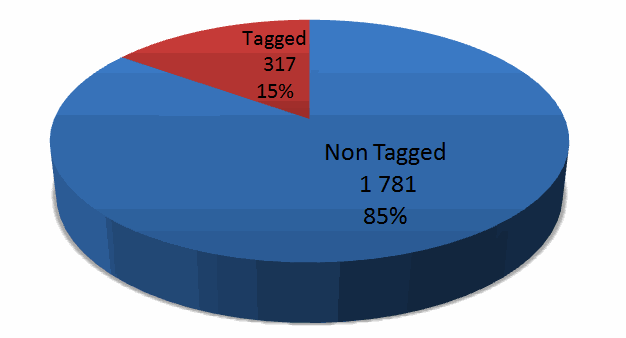 At this rate, Moody’s negative outlook on SANRAL’s credit rating is very justified as it would appear that SANRAL is facing serious problems in collecting the required revenues of over R250m per month. Even if a similar percentage of non-tagged users paid their e-toll bills at the Standard Rate, SANRAL will not be able to raise more than R110m per month, which is well below half their target.

We realise that SANRAL’s e-tag numbers include those issued to car rental & other fleet vehicles which are stationed in other parts of the country, but even if one adds these into the mix (no more than 50,000), the number still falls well short of SANRAL's e-tag sales figure.

“But, don’t take our word for it, do the e-tag count’s yourself. E-tags are easy to see, especially at traffic lights on freeway off & on-ramps and in car parks of shopping centers,” says Duvenage. “This Christmas, there is a new game for your kids whilst travelling around Gauteng – spot the e-tag”.  On a serious note though, OUTA calls on SANRAL to come clean and provide the actual coputerised e-tag counts passing under the gantries. We have exposed their misleading behaviour in the past and once again, our research confirms our suspicion that SANRAL is providing extremely misleading information, clearly aimed at trying to inflate the numbers and create an impression that people are accepting of the system.  “Quite the contrary” says Duvenage, “those who have not tagged up are in the majority to the ratio of 80%. This in turn is a massive blow for SANRAL and a clear indication the public are defying the call to participate in this irrational and ill-conceived policy”.

Two weeks after Gauteng's e-toll project was finally turned on, the Opposition to Urban Tolling Alliance (OUTA) notes that the e-tag uptake has been far lower than initially anticipated.