Taxes and levies make up almost 70% of fuel price

Taxes and levies make up almost 70% of fuel price

The Basic Fuel Price (BFP) component of the overall price of petrol in South Africa, is directly impacted by the international oil price, combined with the Rand / US Dollar exchange rate.  From 2009 to 2014, the BFP has made up the largest component of the price of petrol in South Africa, ranging between 51% and 58% of the price of petrol (for 95 Octane inland price per litre). However, with Government’s ever increasing taxes and levies applied over the past decades, the BFP component has now reduced to around 30% of the total price of petrol in South Africa.
The various taxes and levies which make up the “non-fuel” related costs, comprise of the Fuel Levy (FL), Road Accident Fund (RAF), Wholesale and Retail Margins plus a few other smaller transport and storage charges. In 2009, the combined value of these charges amounted to R3.61 or 49% of the total fuel price. Today, that figure has risen to R9.48 and makes up 68% of the fuel price in April 2020.
“This means that despite a substantive drop of 28% in the BFP, due largely to weaker international oil prices from March to April this year, the impact is a mere 10% reduction in the price of fuel from R15.84 in March to R13,96 in April,” says Wayne Duvenage, OUTA’s CEO.
OUTA has repeatedly raised its concern at the ever-increasing fuel taxes, levies added to the price of petrol and diesel over the years and today, these ever increasing taxes and levies have become the biggest component of price of fuel.
The attached table gives one a sense of how the steady increases in the fuel levy, road accident fund and other non-fuel related costs have added to the costs of  fuel and consequently, the cost of transport in South Africa.
“Once again, we call on Government to halt its incessant increases of fuel levies going forward,” added Duvenage. “We trust that post the Covid19 crisis, Government will focus on reducing the ever-increasing cost of public administration and thereby rely less on the need to increase taxes and levies that have become a substantive burden on the tax-payer.”
Table: Average price of petrol and breakdown of main components per annum from 2009. 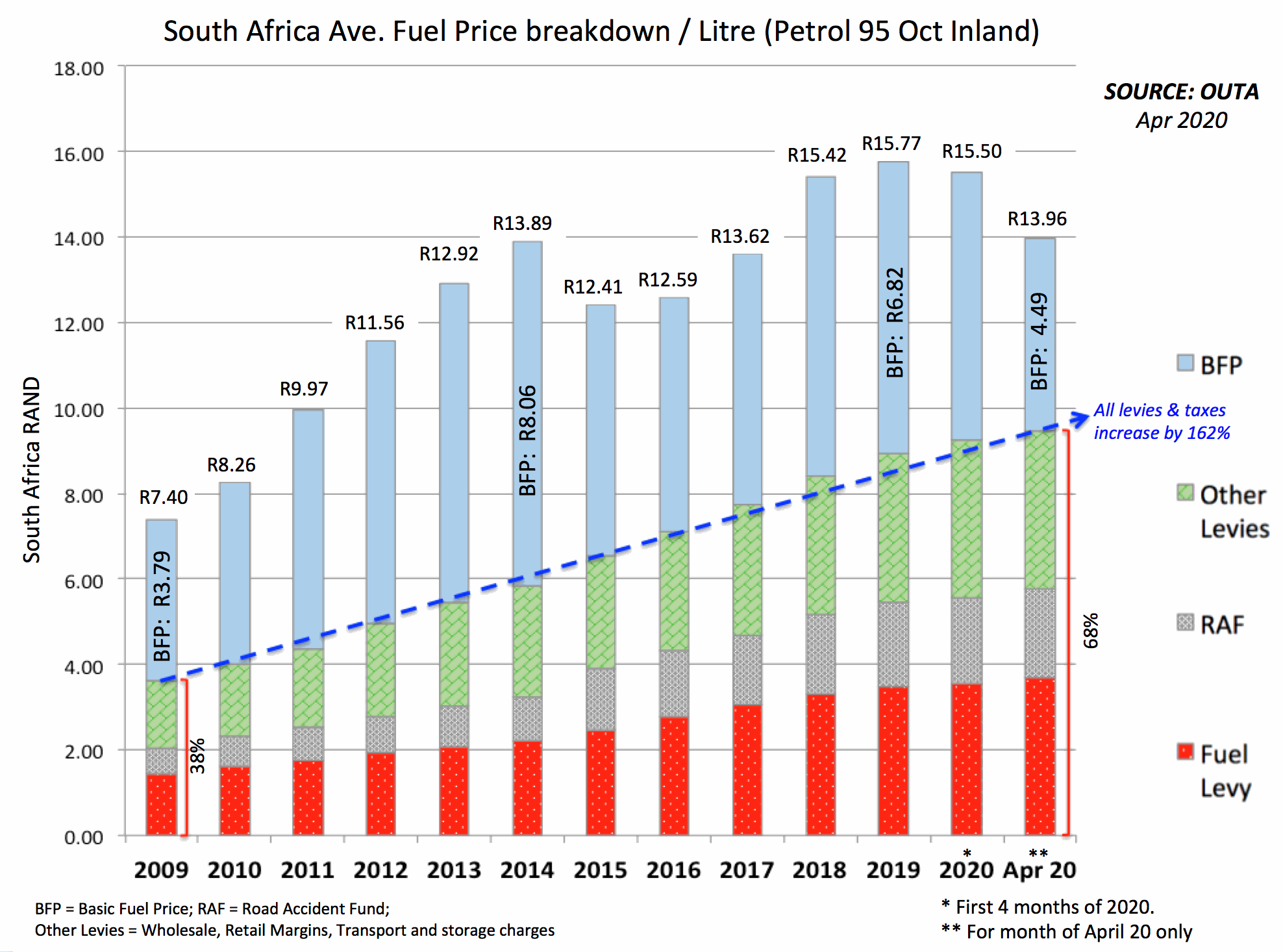 How much are you paying for prepaid electricity in Joburg?