Gauteng’s e-toll scheme has failed dismally to live up to its originally planned expectations.

Despite being in operation for 3 years on 3rd December 2016, and much longer if one adds in the “ready for launch” dates presented by SANRAL in 2011, Gauteng’s e-toll scheme has failed dismally to live up to its originally planned expectations.

In April 2012, SANRAL argued in court that they would achieve 93% compliance levels and would generate average income levels of over R3bn per annum, or roughly over R260 million per month, of which they would use roughly two thirds to settle the bonds and one third (over R1bn) to pay the collection process managed by Kapsch TrafficCom.

“Our research shows that around the world, these electronic toll payment schemes require compliance levels well upward of 80% in order to succeed,” says Wayne Duvenage, Chairperson of the Organisation Undoing Tax Abuse (OUTA).

“At best and only after a multi-million rand marketing campaign which threatened motorists with criminal records, the scheme was able to achieve around 40% compliance levels at R120m per month by mid 2014. Today, that level has dropped to below 18% and around R60m per month.”

From this week, SANRAL’s e-toll debt begins to prescribe at a rate of around R10m per day, and SANRAL will now have no choice but to write off their debt – which has been falsely reported as a collectable asset in their financial statements.

OUTA notes with interest that SANRAL’s Mr Vusi Mona recently started to threaten motorists again with license disc problems or used vehicle sales challenges, when it comes to outstanding e-tolls. We maintain these are hollow threats and urge the motoring public to notify OUTA of any instance when their vehicle license renewals are problematic as a result of unpaid e-tolls, or if any used car dealer refuses to trade in their vehicle as a result of unpaid e-toll bills.

“These actions would be tantamount to harassment and an infringement of their constitutional rights and a stringent class action against such coercive tactics may be instituted against the authorities in these instances,” says Duvenage.

One wonders after all this time and every indication that the scheme has failed, what more the Minister of Transport needs in order to realise the e-toll scheme will never be successful.

The graph gives a timeline of SANRAL’s e-toll revenue levels: 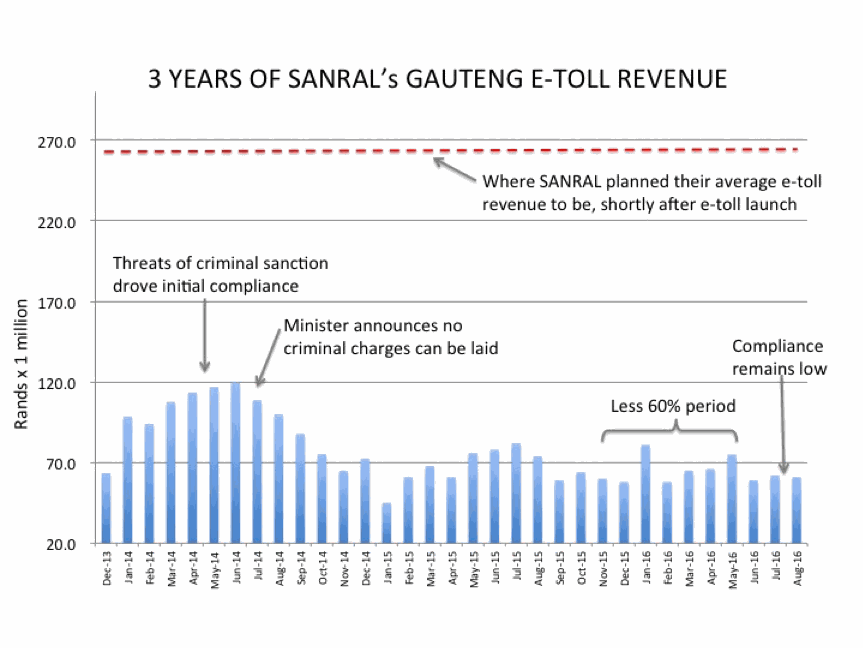 OUTA has written to Minister of Energy, Ms Tina Joemat-Pettersson, objecting strongly to the rushed and defective public engagement process for comment on the IRP.