#UnrestSA: let's compare the cost with that of the "invisible looting" during the state capture years

Our communities are reeling from the impact of the visible looting and plundering during the recent South African unrest. But have we ever considered the cost of the  "invisible" looting that took place because of corruption and state capture? OUTA's state capture expert Rudie Heyneke says it may be hundreds of times more than what the unrest cost our country.

Two weeks ago, South Africans (and the world) watched unprecedented unrest and plundering taking place in parts of our country. We were horrified - and rightly so – to see pictures and video footage from KZN and parts of Gauteng, showing how thousands of people looted and vandalised shops, warehouses, offices and even schools and medical facilities. Nothing and nobody were spared, and billions of rands in damage were recorded.

In KZN alone, experts estimate that more than 150 000 jobs are on the line after 161 malls, 11 warehouses and 8 factories were extensively damaged. More than 200 shopping centres and about 3,000 stores were looted and damaged.

The visible looting and plundering took place for the world to see, and as South Africans, we had front row seats to the destruction.

The President ordered the National Defence Force to assist the South African Police Services to restore law and order. But even before they were deployed, ordinary people decided to protect and safeguard what they could.  Communities, business owners, civil society groupings and even taxi associations joined forces with law enforcement agencies to protect what was left. When it was safe, everybody jumped in to clean up and start rebuilding.

As shocking as the last week was, it should serve as a reminder of the grand scale “invisible looting” that took place in South Africa for more than a decade. State capture was no different from the looting during the unrest – except for the scale on which the corruption and looting from the fiscus robbed South Africans.

Sadly, like we often saw during the unrest, those meant to protect us against the looters, just stood by and watched without trying to stop the plundering. Not only law enforcement agencies like the SAPS and the Hawks, but also our country’s then President, Jacob Zuma, ministers and MPs, the NPA and SARS.

Just like the unrest, the “invisible looting” during state capture robbed us of too much to quantify. It deprived South Africans of quality education, health care, housing, infrastructure, security and much needed jobs. Poverty will increase even more.

Here’s a reminder of what was lost due to corruption, collusion and tax abuse during the Zuma years (not forgetting the estimated R2.2 billion that was looted to pay bribes and kickbacks in the Arms Deal, in which former president Zuma also played a key role). Just think what difference all these billions could have made to our country.

The “invisible” looting of state funds and taxpayers’ money over the past decade far exceed the damage we are currently seeing. Yet, at no time was any action taken while the looting took place. Maybe because the ruling party, government officials, politicians, ministers, big corporate companies, banks and international companies were in cahoots with each other. Nobody tried to stop the looting or to recover the stolen goods. No one, up until recently, got arrested, charged and prosecuted for the looting and corruption.

Also remember that those who enabled the state captors or looked away, are just as guilty as the looters themselves.

Returning what was stolen is not enough. The consequences of looting are devastating. Just as South Africans in the areas affected by the unrest will face a lot of hardship for many months to come, the “invisible” looting will affect SA for a long time. Quality schools and education, top-class healthcare, housing, public transport, safety and security, employment, economic growth – to name just a few – were opportunities lost because of the “invisible” looting.

It is time for us to do what communities did during the unrest. Let’s take hands and unite against corruption and the looting that is still happening in far too many SOEs, municipalities and government departments.

The OUTA team is committed to stop the tax abuse and corruption, but we need YOUR help. With more resources, we can do much more to hold politicians, government officials and SOEs accountable. We can put more pressure on them not to sidestep procurement legislation, policies and procedures when looters intimidate or bribe them. We can help stop government and municipalities from wasting our hard-earned taxes and apply pressure on law enforcement agencies and the NPA to do their job swiftly and without fear or favour.

Our country needs to unite and demand action against invisible looting similarly to how we stood together over the past few weeks against looting.
This is some of the important work OUTA does every day. You can help stop further looting by joining OUTA today. 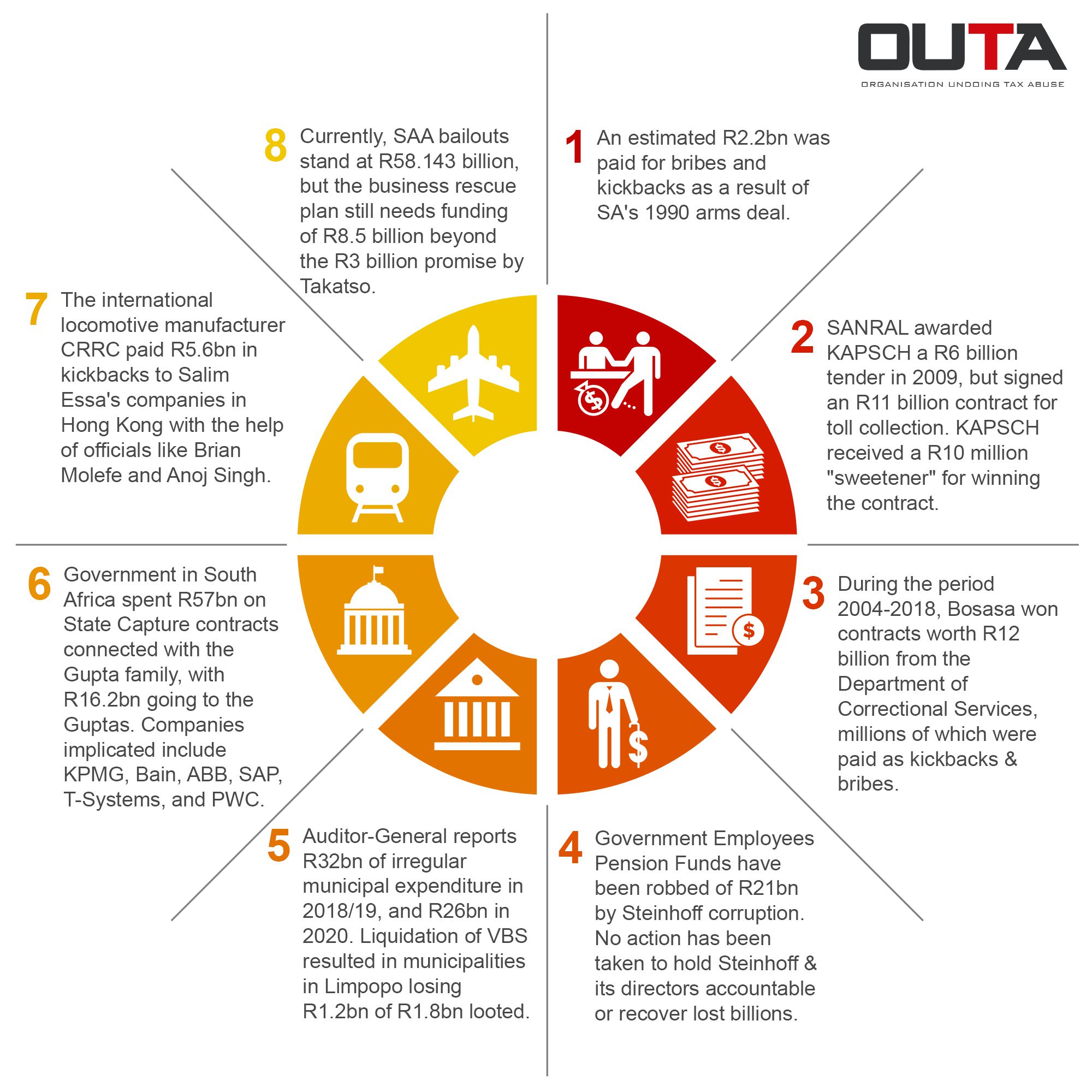