The past year was a busy one for OUTA. Our team worked hard to influence different spheres of government, from local to provincial and national government. Many of our projects are ongoing, and we will keep you updated on the progress.


Here’s a reminder of our biggest successes for 2021. And, since you donate to us, you share in this, and we want to thank you again for helping us to speak truth to power.

The Western Cape Minister of Local Government, Environmental Affairs and Development Planning issues an amended and final directive to the City of Cape Town, ordering it to remedy the state of the Diep River and Milnerton Lagoon. This follows a year of campaigning by OUTA to get the authorities to act against the City. Read more about this here.

The Pretoria High Court order declaring former SAA chair Dudu Myeni to be a delinquent director for life came into effect, when the high court struck her application challenging the interim enforcement order off the roll. Here’s more.

Jenitha John resigns as CEO of the Independent Regulatory Board for Auditors (IRBA), after months of lobbying by OUTA for her removal due to concerns over her previous role at Tongaat Hulett during the time of the group’s financial reporting irregularities.  See here.

OUTA exposes how Electronic Toll Collections (ETC) agreed to pay R40 million to a dodgy subcontractor just two weeks before winning the e-tolls contract in 2009 and then paid at least R10m, and how ETC’s international parent company Kapsch TrafficCom was implicated in corrupt contract payments in Zambia. Read here and here.

The Supreme Court of Appeal dismisses Dudu Myeni’s application for leave to appeal against the Pretoria High Court judgment of 2020 which ruled her to be a delinquent director for life. These judgments arose from OUTA’s successful civil action to declare Myeni a delinquent. See more here.

In the final budget for 2021/22, the City of Johannesburg scraps the proposed R50 recycling levy and abandons its attempt for the third year in a row to add a fixed monthly charge to prepaid electricity. OUTA had submitted formal objections to both. Read more here and here.

Parliament’s Portfolio Committee on Human Settlements, Water and Sanitation indicates support for the establishment of an Independent Water Regulator (IWR). In August, an IWR is included in the draft National Infrastructure Development Plan 2050. OUTA and Water Shortage SA have been campaigning for an IWR since January 2019, including engaging with the portfolio committee. See here:  and here.

The Johannesburg High Court orders the Services Sector Education and Training Authority (Services SETA) to hand over information to OUTA on a controversial R163 million contract. This after the SETA refused OUTA’s PAIA request in January 2019. More info here.

In another win for transparency, the Pretoria High Court orders SANRAL to hand over a copy of its contract with Trans African Concessions (TRAC) along with financial and other records, after SANRAL refused OUTA’s request for information under the Promotion of Access to Information Act (PAIA) in June 2020. Full story here.

The City of Cape Town publishes information on water quality, after OUTA wrote to the City objecting to the City’s requirement that some organisations sign non-disclosure agreements or terms of use agreements before accessing such information. Read here.

OUTA launches its first book, in partnership with the Konrad Adenauer Foundation (KAS). Permitted Plundering: How Parliament Failed South Africa by Ilse Salzwedel unpacks how Parliament failed to protect the country against looting by government and state-owned entity officials, and what OUTA did to oppose this. More information and how to get your own copy is here. 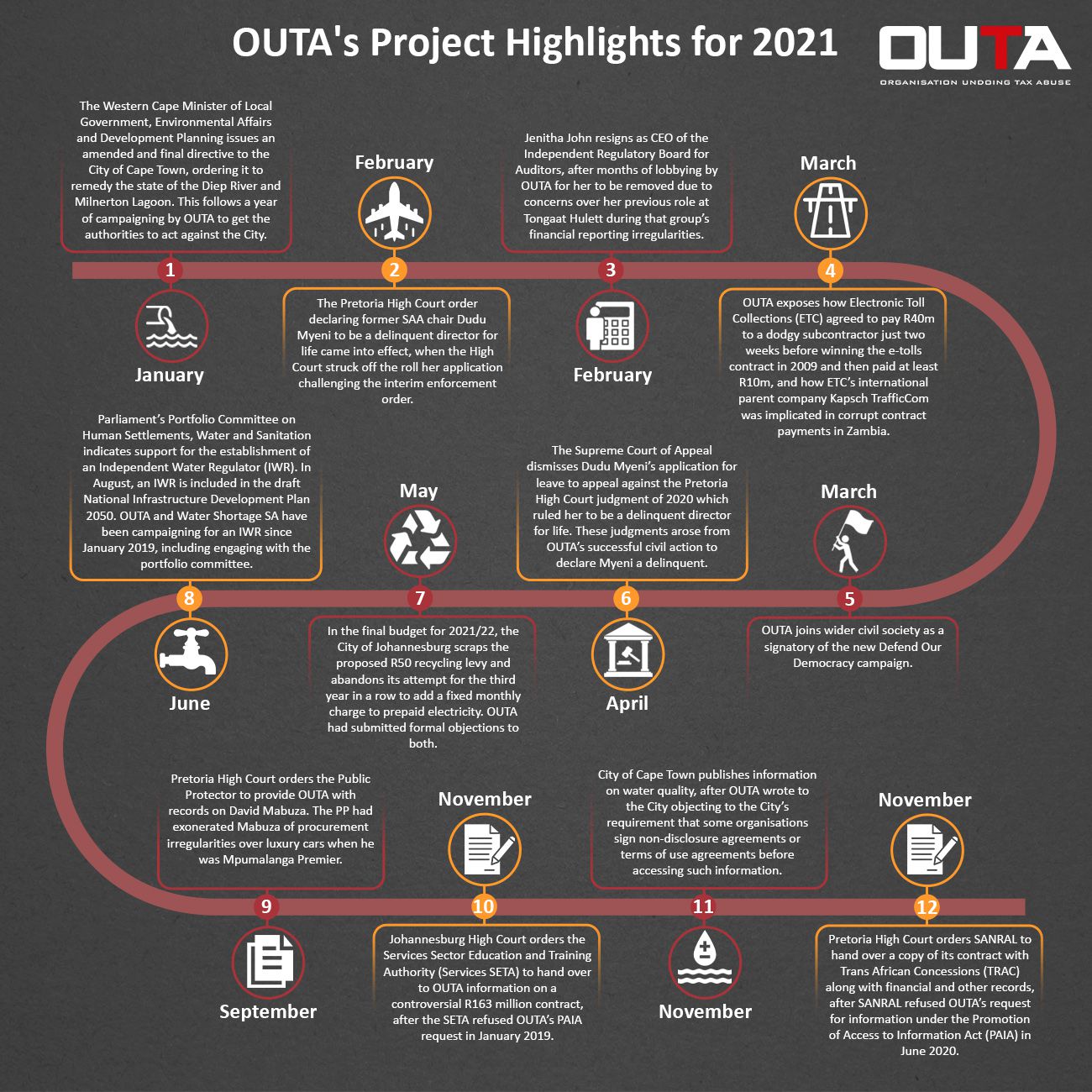