No new dawn over Lesotho water supply to Gauteng

The LHWP II is delayed, expensive and wastes water.

No new dawn over Lesotho water supply to Gauteng

The second phase of the Lesotho Highlands Water Project (LHWP) should have been delivering water to Gauteng this year but it’s about eight years behind schedule.

The agreement with Lesotho means that South Africa will be paying a minimum charge for the water that was expected to be delivered, even if it doesn’t arrive before 2026.

The agreement also ties both countries into an arrangement that encourages substantial waste of water, even in times of drought.

The Organisation Undoing Tax Abuse (OUTA) today releases an updated report on the progress of the Lesotho Highland Water Project Phase II (LHWP II). This follows a number of actions by OUTA since 2017 to apply pressure on authorities over the delays of this critical project which is responsible for Gauteng’s water security.

“We have seen good progress since 2017 but there is a lot of work to be done, especially because the LHWP II was supposed to start supplying Gauteng with water this year but instead we are seeing water constraints in our metros,” says Julius Kleynhans, Operations Executive at OUTA. “We believe that those in the new administration have played a significant role in encouraging progress in this project.”

The LHWP Phase II was supposed to have started delivering the extra water to Gauteng this year.

LHWP II involves building the new Polihali Dam, the Kobong Dam, the Kobong pumped storage power station and transfer tunnels into the existing Katse Dam. The main construction contracts have not yet been awarded.

LHWP I was completed in January 1996 and has been delivering water from the massive Katse Dam in Lesotho through 82km of tunnels across the South African border to an outfall in the Ash River near Clarens in the Free State since 1998. From there the water runs down rivers into the Vaal Dam, where it is used to supply the increasingly thirsty Gauteng and assist in the dilution of pollutants such as acid mine drainage.

The new delivery date for the extra water through LHWP II is now early 2026. However, based on the current progress in the awarding of tenders and applying realistic timelines for such a complex project, OUTA is of the opinion that the first water will not be delivered before late 2026 or early 2027. This will be about eight years later than originally planned and escalate the project costs by billions, and taxpayers and Gauteng water-users will have to cough up for this.

LHWP encourages the waste of water

It’s supposed to benefit both parties.

But the current rule for the operation of Katse Dam is to continuously release water via the transfer tunnel between Muela hydropower station and the Ash River outfall. This was agreed to allow Lesotho to generate the maximum amount of electricity, but this is not optimal from a water-management perspective because it compromises water security.

This year a dry season and the continuous flow left the Katse Dam at 17% by September, when the tunnels were closed for two months of planned maintenance. Earlier this year, the Vaal Dam was overflowing but water still ran into it from Katse – and through it and on downstream to the Atlantic Ocean.  Rand Water’s website update on dam levels this week shows Katse still at 17% and Vaal Dam at 43%. Mohale Dam, which feeds Katse, is at 27%. Although the Katse tunnel to South Africa is due to reopen, it’s not going to help fill the Vaal yet.

The contract is based on payment for a minimum amount of water, regardless of what is delivered. These amounts are due to increase sharply this year, because LHWP II was due to come online this year. So South Africa will be paying even if we wait until 2026 for the increased supply.

Now there’s a plan to send Katse water to Botswana

South Africa, Lesotho and Botswana have apparently agreed to build a 720km pipeline from Katse across South Africa to supply water to Botswana. This is the Lesotho-Botswana Water Transfer Project.

To date there has been no public participation about this scheme or a formal international agreement for the project. We understand that feasibility studies are underway. We’d like to know more and would like the public to have their say about this.

OUTA is of the opinion that such a project should not be on the cards as South Africa already lacks sufficient water supplies with the increased demands in population growth, urbanisation, economic demands and food security.

At least 36 of the main contracts on LHWP II have been signed, although the big construction contracts are still awaited.

After disastrous corruption in LHWP II (the then CEO of the Lesotho Highlands Development Authority, which runs the Lesotho end of the project, spent nine years in jail), the LHWP II has anti-corruption protocols written into it.

Nomvula Mokonyane is now out of the picture. Mokonyane was Minister of Water and Sanitation from May 2009 until April 2014 and has been strongly linked to state capture in South Africa. She reportedly tried to force the appointment on LHWP II of an engineering firm without acknowledgment of the required skills, experience and established procedures, but didn’t succeed.

Mokonyane and her successor, Gugile Nkwinti, who was minister until April 2019, were South Africa’s political representatives on a scheme that has seen years of delays.

There are still questions over corruption and mismanagement

The Project Management Unit was appointed in 2013 but still hasn’t been given the appropriate decision-making powers. Why is this unit being bypassed?

There’s no independent water regulator in South Africa to watch over tariffs that the public is ultimately charged for this water.

The delays – at least some blamed on Mokonyane’s meddling – may have cost an extra R1 billion.

OUTA has written to Minister of Human Settlements, Water and Sanitation with questions about the LHWP; our letter is here.

The graphic of the LHWP scheme (above) is also here.

Comment on this by Julius Kleynhans in English (1 min 34 sec) is here.

Comment on this by Julius Kleynhans in Afrikaans (1 min 50 sec) is here. 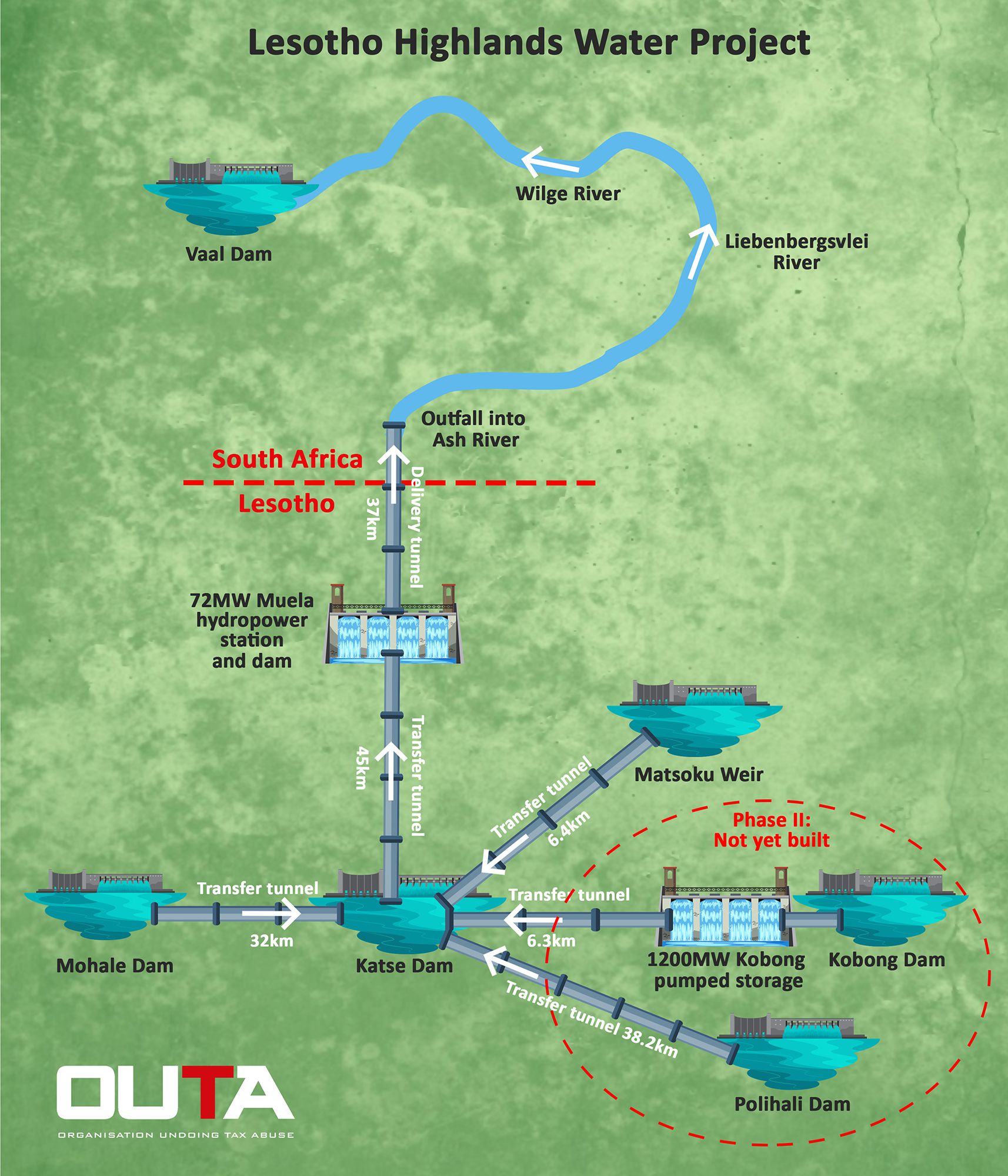 The NHI must be fair to patients and taxpayers, well managed and corruption-free or it will fail.