AARTO AMENDMENT ACT IS NOT THE ANSWER TO ROAD SAFETY

The Administrative Adjudication of Road Traffic Offences Act of 1998 (the AARTO Act) sets up a single national system of road traffic regulation, to hold motorists to account for traffic violations.

The AARTO Amendment Bill, which was tabled in 2015, passed by Parliament in 2017 and signed by the President in August 2019.  It is waiting for a commencement date to be gazetted before it comes into effect.

In 2019, new regulations were issued in terms of the AARTO Act, updating the 2008 regulations.

In 2020, new regulations were issued in terms of the AARTO Amendment Act, updating the 2019 regulations.

The AARTO Amendment Act of 2019 is here.

The new AARTO regulations of 2020 are here.

On 1 July 2021, the Department of Transport delayed the implementation of AARTO, and instead announced rollout details. See here.

These are our concerns about the AARTO law as amended by the AARTO Amendment Act:

For more on OUTA's objections to the AARTO Amendment, see:

The controversial amendment to AARTO (the Administrative Adjudication of Road Traffic Offenses Act, 1998), has been passed but its shortcomings have not been addressed. The AARTO Amendment Bill was passed by Parliament in September 2017 and signed by the President in August 2019, but it is not yet in effect as a date for this has not been gazetted. The Minister of Transport said it would be implemented in June 2020, but this was delayed and a new date of June 2021 was punted; this again was delayed. On 1 July 2021, the Department of Transport delayed the implementation of AARTO, and instead announced rollout details. See here.

On 13 August 2020, OUTA submitted a request for access to information in terms of the Promotion of Access to Information Act (PAIA) to the Road Traffic Infringement Agency (RTIA), requesting information relating to the readiness of roleplayers in the national AARTO roll out. The list information requested is here.

On 7 July 2021, OUTA wrote to the Road Traffic Infringement Authority (RTIA), asking why the RTIA's explanations of AARTO on its website omitted information about alleged infringers' rights to approach a court to oppose infringement notices. The letter is here.

2020: The constitutional challenge in the Pretoria High Court

While OUTA believes that measures to improve road safety and reduce fatalities are urgently needed, we believe that the AARTO Amendment Act will not achieve this. AARTO was rolled out in Gauteng 10 years ago and failed spectacularly. Statistics do not support the claim that it will lead to a reduction in fatalities on roads.

The application calls for the court to declare both the main act and the amendment unconstitutional. This is because this legislation unlawfully intrudes upon the exclusive executive and legislative competence of the local and provincial governments envisaged in the Constitution. If the court finds that the law is not inconsistent with the Constitution, then OUTA further opposes Section 17 of the Amendment Act. This removes the requirement that service of notices and related documents must be done personally or by registered mail, instead allowing the uses of email, SMS or voice message.

The OUTA Notice of Motion and Founding Affidavit outlining the case in the Pretoria High Court are here.

OUTA's heads of argument are here.

Here are the heads of argument for the First and Third respondents.

The case was set down in the Pretoria High Court for 18 and 19 October 2021, the Notice of Set down (Special Allocation) is here.

On 13 January 2022, the Pretoria High Court ruled in favour of OUTA, declaring the AARTO Act and the AARTO Amendment Act unconstitutional and invalid. The judgment is here and OUTA's statement at the time is here.

On 3 February 2022, OUTA applied to the Constitutional Court for confirmation of the Pretoria High Court ruling (the Concourt must confirm any judgment declaring a law to be unconstitutional). The application is here.

By mid-April 2022, there were three three legal actions in the Concourt and confusion over whether government is defending its law.

Directions from the court are awaited. These three actions are detailed below.

Rule 16(4) states that those seeking to confirm an order of unconstitutionality shall, within 15 days of the order, lodge an application for confirmation with the Concourt; the matter shall be disposed of in accordance with directions given by the Chief Justice. These directions are still awaited.

The four respondents (the Minister of Transport, the Minister of Cooperative Governance and Traditional Affairs, the Road Traffic Infringement Authority, and the RTIA Appeals Tribunal) had 15 days to file a notice of intention to oppose OUTA’s application.

Only on 24 February, the Minister of Transport filed notice of intention to oppose. The Minister then had 15 days to file an answering affidavit, but OUTA received the Minister's affidavit only on 6 May 2022.

On 28 July 2022, the Constitutional Court provided OUTA with the Directive on how to proceed with the matter (see here and see below – "The Concourt Directive setting out the way forward" – for details of this).

Concourt application 2: The notice to appeal

On 7 February, the Minister of Transport and the RTIA separately filed their notices of appeal at  the Concourt, setting out the reasons they wish to appeal the high court ruling. This is separate to OUTA’s confirmation application and follows a different process in the Concourt.

The same day, OUTA filed a notice of intention to oppose the appeal.

The Minister’s application is also brought in terms of Rule 16, but a different section. Rule 16(2) states that those who want to appeal against an order of constitutional invalidity should lodge a notice of appeal – and the grounds for the appeal – with the Concourt within 15 days of the court’s order of invalidity; the matter shall be disposed of in accordance with directions given by the Chief Justice. These directions are still awaited.

On 8 March, the Road Traffic Management Corporation (RTMC), a state-owned entity that reports to the Minister of Transport, applied to the Concourt for permission to intervene and be joined as the fifth respondent in the case. The RTMC wants to join the appeal against the high court judgment; failing that, the RTMC wants to oppose OUTA’s application for confirmation of constitutional invalidity.

The RTMC was not party to the high court case, and this is the first indication it is interested in the matter.

On 15 March, OUTA filed notice of intention to oppose the RTMC’s intervention application and, on 7 April, filed an answering affidavit in support of this.

On 28 July 2022, the Constitutional Court provided OUTA with the Directive on how to proceed with case CCT 19/22 (see here).

This Directive sets down to be heard on 15 November 2022, effectively combines all three matters, admits the RTMC as the fifth respondent, condones the late filing of the Minister's answering affidavit, directs OUTA to send written arguments to the Concourt on or before 9 September 2022, and directs the five respondents (the two ministers, the RTIA, the RTIA Appeals Tribunal and the RTMC) to send written arguments – including merits of their appeals – to the Concourt on or before 22 September 2022.

Here are the positions so far

In the confirmation application, OUTA asked for the matter to be decided as soon as possible, as government intends rolling out AARTO.

Concourt 2: The notice to appeal

The notices  by the Minister and the RTIA say that the high court erred in granting the declaration of constitutional invalidity.

The notice of appeal papers:

The RTMC makes arguments which were not placed before the high court, saying this is not new evidence but rather context on the legislative scheme and the history of road traffic regulation.

The RTMC argument includes that:

1. I was told that I can’t renew my licence because of outstanding traffic fines, is it true?

No. Only if there was an enforcement order issued won’t you be able to renew your licence.

2. Can I just ignore an AARTO traffic fine?

We would NOT recommend that you ignore any AARTO fine, but collect your traffic fine from the post office. The implications of not doing so will lead to the issuing of an enforcement order and ultimately mean that a vehicle license or driver’s license cannot be renewed.

3. How do I view my traffic fines?

You can visit the AARTO website www.aarto.gov.za and click on the link “Login”. You will be required to enter the unique code they provide you with and you will also need to enter your ID number as well as your license card number.

• You will then be able to view all the fines issued against your name.

• You can click on the specific fines and view the detail, including prior communication about them to you.

• Once you have the details you can click on the different electives available. This will give you the option to select which elective you wish to choose.

• You can then submit this to the e-mail address they provide. You should then receive feedback on the dispute within two weeks of submission. Your dispute can also           include the fact that you’ve never received notice of the fines previously.

Yes, Traffic fines are enforceable. They are regulated by the Administrative Adjudication of Traffic Offences Act. We recommend that you pay the fine if you are guilty of the infringement or offence.

5. Can I receive an AARTO notice via text or email?

This will change when the AARTO Amendment Act comes into effect.

6. I have received an infringement notice. What are my options?

Once you have received an infringement notice, AARTO provides you with five options. You may select one of the following:

7. How do I nominate another driver?

You can do so online by filling out the AARTO 07 form on their website here. You will need to verify yourself before the form will be made available to you.

8. What happens when I make a representation?

9. What happens if I select to be tried in court?

When the court receives your request via the AARTO authorities, you will receive a summons to appear in court that will detail the address, time and date of your appearance. Once the case has been heard, the court will inform the authorities of the result.

10. Will I, at this stage, incur demerit points?

11. Will I incur demerit points for not paying e-tolls?

The demerit point system will NOT be used to enforce e-tolls.  According to the proposed AARTO Regulations (which sets out how many demerit points will be awarded for each infringement), the non-payment of e-tolls or the “ignoring of a toll-sign” does not incur any demerit points.

Therefore, you will not incur demerit points for the ignoring of a toll-sign (e-tolls). 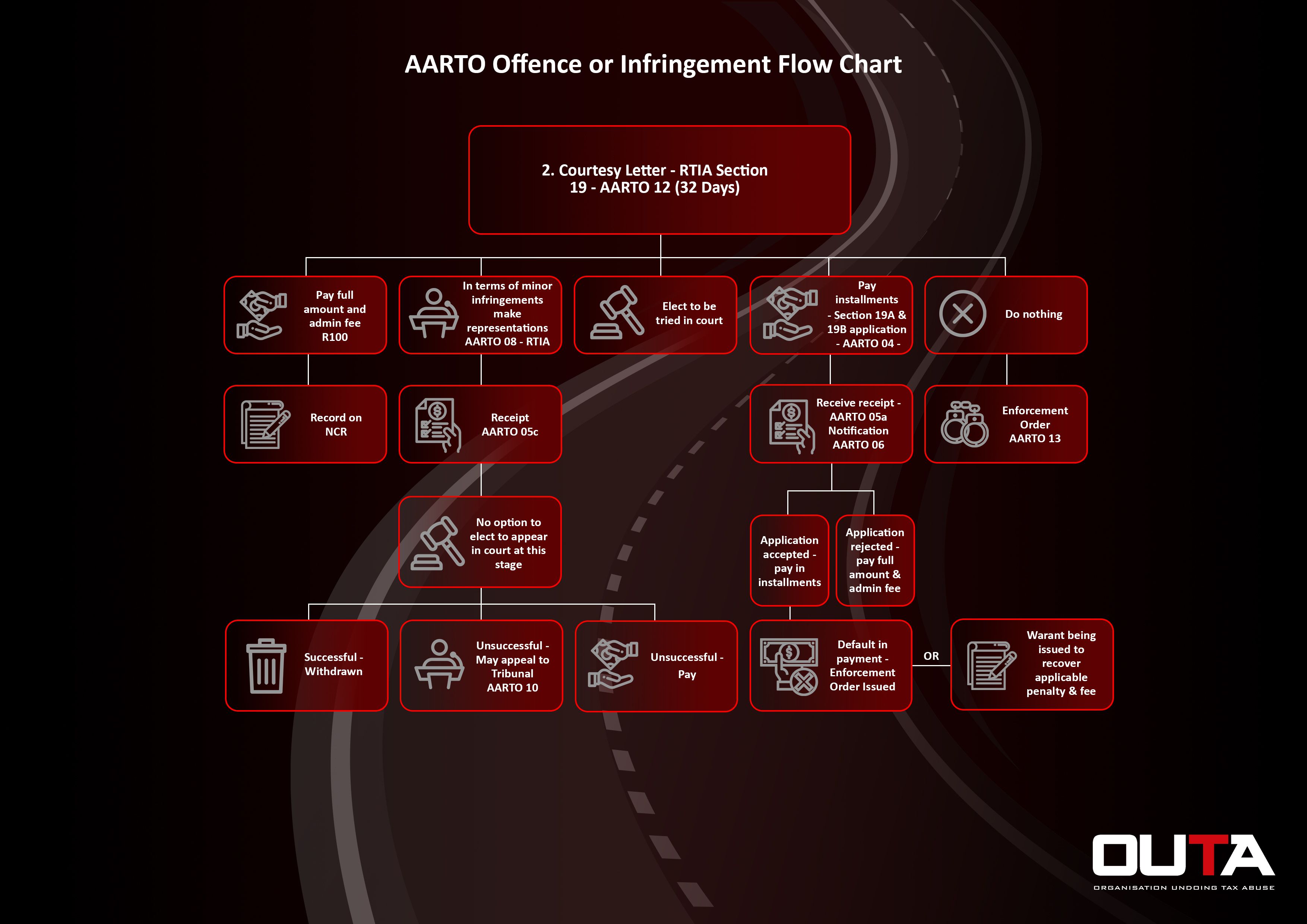